Candice Eden Shares the Message of Grace with "It Is Enough"

Christian Rocker Caspar McCloud Releases 'Like A Thief In The Night'

Moe Bandy Reveals New Album, "A Love Like That," Produced by the Late Jimmy Capps

Life.Church Worship On Creating New Music to Remind Us of God's Sovereignty in this Pandemic

LeAnn Rimes, country music diva, has had a great Christmas. Her husband Eddie Cibrian gave Rimes a large diamond ring which she shared a look at on her Instagram page on Friday. Christmas is also the five year anniversary of the couple's engagement. 18 years ago, Rimes was at the top of Billboard's Country Albums chart with You Light Up My Life: Inspirational Songs or simply You Light Up My Life. This is the second studio album by Rimes. Released in the United States by Curb Records on September 9, 1997, Rimes was only 15 years old, it followed her debut album Blue, an album that placed Rimes on the map. 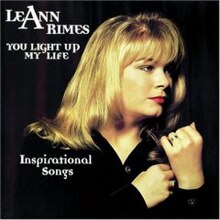 It is the only album in history to debut at number one on three separate charts at the same time, the three charts being the Billboard 200, the Billboard Top Country Albums, and the Billboard Contemporary Christian. You Light Up My Life: Inspirational Songs debuted at number one on Billboard 200 with 186,000 copies sold in its first week, the album dropped to number two in its second week but with a 10% increase with sales of 204,500. It returned to one in its sixth week with 131,500 copies sold. The album spent 13 weeks in the top 5, 17 weeks in the top 10 and a total of 55 weeks in Billboard 200. You Light Up My Life: Inspirational Songs was certified 4× Platinum by RIAA, denoting shipments of over 4 million copies.

This is what AllMusic has to say about the album: "As the official sequel to Blue (Unchained Melody was a collection of early recordings), You Light Up My Life: Inspirational Songs carried a lot of expectations. It was a record that should have consolidated LeAnn Rimes' status as contemporary country's brightest new star, but instead it does a curious thing -- it positions her as an adult contemporary crossover artist. You Light Up My Life has as much pop as country, relying on such easy listening standards as the title track, "The Rose," and "God Bless America." As a result, the album has a bit of a bland, homogenous quality -- it certainly could have used a bit of country grit. Rimes sings well throughout You Light Up My Life, but she often doesn't seem to connect completely with the material -- it's telling that a remix of her previous hit "How Do I Live" stands out as one of the finest cuts here. You Light Up My Life is far from disastrous -- Rimes has too much natural talent to be sunk by poorly chosen material -- but it isn't the great leap forward it could have been."