Aaron Shust Brings Isaiah 6:3 to Life with "The Holiest"

Zoe & Cloyd Release “Where Do You Stand” Video

According to a Barna research study, a majority of Christian Millennials struggle with the idea of evangelism because they feel as if people might be offended if they share their faith or they will be considered judgmental by their peers. Tim Ross, author of the new book "Upset the World" (Gateway Press), says that despite what people's reactions may be, sharing the Christian faith is crucial, especially in an increasingly secular society.

"A lot of churches have reduced relational evangelism to a weekend or monthly event," says Ross. "As believers, we are mandated by Scripture to make disciples of all nations, and we need to be evangelizing people on a daily basis for the rest of our lives. Hug people. Have conversations with people. Build relationships with them. We need to become fearless in our faith. If you cannot love people right where they are, you probably have a hard time receiving love from God yourself."

Ross says the title of his book is not meant to evoke or condone the present-day unrest in our world but is derived specifically from Scripture.
​
"The book is based on a sermon series I did several years ago about Acts 17:6. This verse says, 'Paul and Silas have caused trouble all over the world.' In the Greek, the word 'trouble' literally means 'to upset.' You may think if you have made someone upset, you have made them angry. However, the more accurate and appropriate definition of the word 'upset' is to 'disturb or derange completely.' Anyone who has come into a relationship with Jesus Christ has done so because they have had their world upset by Him."

Ross believes the only way to upset the world is to be like Jesus, and that means showing love to everyone.

"Several years ago, a LGBTQ group called our church and said they were coming to picket and protest," says Ross. "Everyone was on high alert that weekend. As the Sunday service was about to begin, I asked one of the security guards where protestors would be gathering. Then I asked, 'Can we get some Danishes and coffee for them?' The security guard seemed genuinely shocked. I explained, 'The best way to break down this wall of hostility is to show them how much we love them.' Love was Jesus' motivation to upset the world, and it should be ours as well. Only love can burst the mindset of hate." 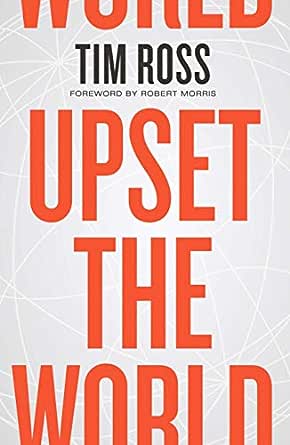 Tim Ross is the lead pastor of the multi-ethnic, multi-generational Embassy City Church in Irving, Texas. He has served in ministry for more than 24 years and is a sought-after speaker both nationally and internationally. Tim and his wife, Juliette, have been married more than 20 years and they have two sons, Nathan and Noah.