Bishop Frederick and Dr. Erica Travel Back in Time in Their New "The Christmas Song" Video

New DocuFilm "What If Jesus Had Never Been Born?" Airs Dec 11 and 18

John Conlee, Grand Ole Opry star and one of the most recognizable voices in country music, honors law enforcement officers around the country with his performance of "Walking Behind The Star", recently performed on the #1 rated cable morning show Fox News' FOX & Friends. 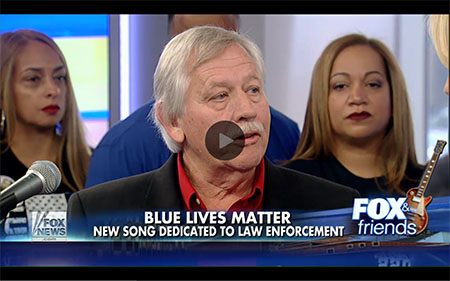 "I wanted to do this song to show support to police officers who are just doing their jobs," says Conlee. "With all the turmoil going on I think they are relieved that someone is paying attention the other way and giving them a pat on the back."

Conlee's poignant interpretation of "Walkin' Behind the Star" has sparked comments from around the country:

Howard R. Sills, sheriff for Putnam County, GA -- "For the last 41 years I have been a police officer and for the last 19 years I have been the Sheriff of my hometown community. Needless to say we in the law enforcement profession haven't been thought of too highly in most of the national media of late. This media coverage has made me more than a little despondent. I was lamenting about all of this when I turned on the Opry show this past Saturday night. It was not too long after the show began before a wonderful breeze of fresh air swept across my veranda and from my old GE radio sitting up on the porch rail. That breeze was the moment I heard you announce to the audience and the world that the Opry wanted to take a moment to honor those who "walk behind the star" and you sang the song with the same title that I'd never heard before. It literally caused me to tear up and it lifted my spirits. I cannot express thanks enough to you, the Opry and WSM-AM for the recognition during your show."

Mike Kelleher, chaplain from San Bernardino County Sheriff department -- "With all the bad press our force is constantly receiving, I would like to thank Mr. Conlee for his uplifting song."

James Bartels, police officer in Patriot, OH -- As a policeman shot in the line of duty, I found John Conlee's comments and his performance on the Grand Ole Opry very moving. I would like to thank him for understanding the terror law enforcement endure every day in the society we live in.

Derik Walker, K102 Country in Spokane/Sandpoint, ID -- Just wanted you to pass along to John Conlee that his song, "Walkin' Behind The Star" was the absolute perfect song to play this week for our fallen officer Greg Moore of the Coeur d'Alene, Idaho police department. I can't tell you how many calls we got regarding the song and how much it meant to folks in the inland Northwest as they deal with this tragedy. Sargent Greg Moore served the people for 16 years, before he was gunned down in Post Falls, Idaho Monday night. Please extend our gratitude to John on behalf of the entire K102 Country family!

David Lyons, police chief in Savannah, GA -- I am a police chief in the state of Georgia, the immediate past president of the Georgia Association of Chiefs of Police and a career police officer. I heard you sing the song, "Walkin' Behind the Star" and wanted to tell you how much I appreciated you. With all that's going on in the world right now along with the attacks on our police officers, it is good to hear some appreciative words. Thank you and God bless you.

Conlee's newest release, "Bread and Water" has deep meaning to the veteran Opry legend. "The song was written by Vince Gill and Leslie Satcher and hit me right in the heart the first time I heard it. It is a story of redemption and a reminder that with God, all things are possible."

John continues the long-standing relationship between faith and the country music industry. "Out of concerns for today's America it has affected the way I'm applying my musical energies. I believe in prayer and I feel like now more than ever is the time to be singing about it and hopefully inspiring others to do the same."

About John Conlee
Kentucky native and Grand Ole Opry member, John Conlee, has one of country music's most recognizable voices. Self-penned and signature hit "Rose Colored Glasses," was the first of over 30 hit singles, most of which charted in the Top 10 or better. Some of the songs from the John Conlee hit list include "Back Side of Thirty, " "Lady Lay Down," "Friday Night Blues," "Common Man," "I'm Only In It For The Love" and "Domestic Life." All of Conlee's hits have that unmistakable common thread - that unique voice. In 2015, Conlee hasn't slowed down and continues to cut songs with substance with the release of Classics 2 that includes a tribute to law enforcement titled "Walkin' Behind the Star."

Fans can see Conlee perform in the following cities: