The Deseret News "Faith in America Survey," conducted by The Marist College Poll, shows Americans are divided on the relationship between their faith and professional lives. Furthermore, a majority of Americans say their religion or faith plays no role in where they decide to work or shop.

The new faith and business data is the second part of the Faith in America survey issued by Deseret News. The first survey reportwas issued March 21 and looked more broadly at the state of religion and faith in America, noting a growing trend of Americans retaining core religious beliefs even as they are less attached to religious practices and institutions, such as daily prayer and attending services.

"Our overall survey looks at how Americans of different backgrounds do or do not incorporate religion and faith into key aspects of their personal and professional lives, and when it comes to faith and business the survey indicates Americans are largely comfortable with those they work with knowing their personal religious beliefs," said Hal Boyd, Executive Editor of Deseret National. "However, a majority feel one's religious beliefs should not influence their business decisions, and likewise, a majority of Americans, as well as Christians, report that their religion does not play a role in where they choose to work or the businesses where they shop." 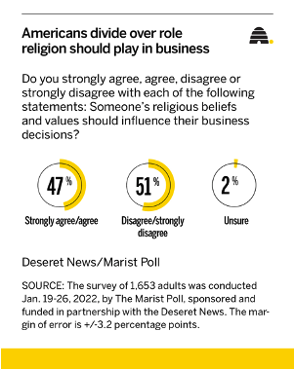 Americans divide over role religion should play in business. 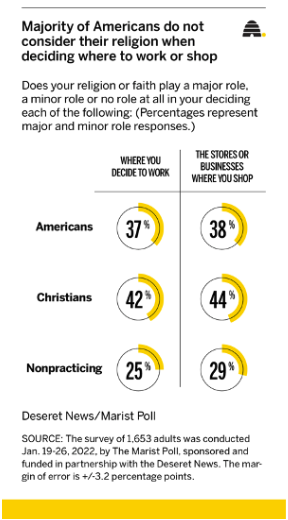 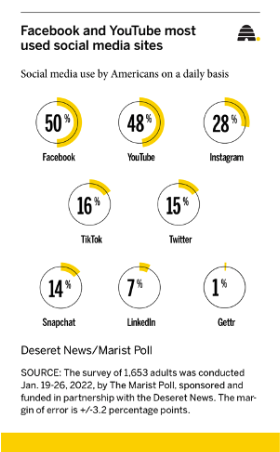 Faith and social media usage: religion is not a strong influence over preferred sites, but age is

Tags : Faith in America Survey’ The Deseret News 61% of Americans Say Faith Plays No Role in Where They Work or Shop faith