Find Out What Loretta Lynn's Final Words Are

Selah Reflects on 25 Years in Music Ministry & Their Upcoming Albums

Veteran country music singer and songwriter Bill Anderson has released a new Gospel album, God is Good, Good is Great. Known for his breathy voice and soft approach to singing which earned him the nickname "Whisperin' Bill Anderson, he is put his signature voice to 40 great hymns of the Church, favorite Southern Gospel songs, and a few of his own compositions.  Vince Gill and Jan Howard can also be heard singing with the songwriting legend.

Now, Anderson has also written his autobiography, slated for release on September 1, 2016. Whisperin' Bill Anderson: An Unprecedented Life In Country Music is a 360-page representation of Anderson's journey published by University of Georgia Press featuring respected music journalist and Grammy-nominated music producer Peter Cooper as a contributing writer. It includes rare, never-before-seen photos and eye-opening personal stories from Anderson's nearly eighty years of living - from early days of radio broadcasting in Georgia, to standing alongside the greatest country music stars in the world onstage at the Grand Ole Opry, to being named BMI's first ICON Award winner in the country music genre.

"I sometimes look in the mirror and wonder how one man could have been so blessed to have crammed so much living into one lifetime. I see the gray on my temples and instead of trying to hide it, I remember how much fun I had putting it there. Writing it down for these pages was almost akin to living it again, though, and I probably need to take a deep breath, relax and go sit down in the corner. Come sit with me, bring the book, and let me tell you about it," said Anderson.

With the 2015 success of Mo Pitney's "Country," Anderson has become the only country songwriter to tally a Top 40 hit in seven consecutive decades, and he stands today a legendary performer poised to celebrate his 55th Anniversary as a member of the Grand Ole Opry in July. The youngest writer to ever be named "Songwriter Of The Year" (BMI) at age 23, prior to 21-year-old Taylor Swift, Anderson has certainly lived an unprecedented life in country music. Fans, artists, songwriters and music executives young and old revere him for his soft speaking style that can silence a room with just a few poignant words.

But there was a time in the early 90s that Bill felt as if his words no longer mattered. "I didn't write much anymore because I didn't feel as if what I wanted to write related to what young listeners wanted to hear," he revealed. However, it was in 1992 that singer/songwriter Steve Wariner helped to re-ignite Anderson's writing career with a cover of "Tips Of My Fingers." The exposure the song received made Anderson test the waters as a co-writer, and in 1994, he teamed up with Vince Gill to write "Which Bridge To Cross (Which Bridge To Burn)."

Gill said that as a life-long lover of songs, he had no idea what a profound impact Bill would have on him throughout his career, and still to this day, when he hears one of his favorite songs, he finds out that Bill undoubtedly wrote it.

"When I asked him to write some songs with me in the early 90s, I was shocked to hear him say he didn't write much anymore because he didn't think my generation was interested in what he had to say," Gill said.

"I told him I believed he was one of the most prolific and important songwriters in our history, and it would mean the world to me if we could write together. 'Which Bridge To Cross (Which Bridge To Burn)' was the result of that collaboration, and in Bill's words, it lit a fire to want to keep writing with some of us kids. Well, believe me, we kids are better songwriters because of Bill Anderson," Gill added.

Anderson also celebrated unprecedented success in the new millennium with the Kenny Chesney hit "A Lot Of Things Different," George Strait's "Give It Away," and the multiple CMA/ACM Award winning song, "Whiskey Lullaby," (2004), recorded by Brad Paisley and Alison Krauss.

Paisley said, "Very few songwriters or artists will be prolific or talented enough to enjoy 2 or maybe 3 decades of success. Bill Anderson is going on 7. His words and melodies are a part of the very foundation upon which country music is built."

And even icons like Dolly Parton look up to Anderson for his legacy.

"Bill Anderson has been an inspiration to me as a writer since I was young and new in Nashville. It was songs like 'Still' and "Once A Day' that made me want to become a better writer. Bill has written so many wonderful songs and is a major force in country music, not only as a writer, but as an entertainer, singer and host. It would be impossible to really measure his worth in this industry, but it's BIG! I also love and respect him as a gentle and wonderful human being. Though he speaks softly, he carries a big stick and is a wise and effective businessman. I've always admired him for that, too. In the words of one of my own songs, I would like to say Bill Anderson, I will always love you," said Dolly Parton.

To pre-order the new release, please visit www.billanderson.com. Free shipping will be applied to all orders placed prior to March 1, 2016. 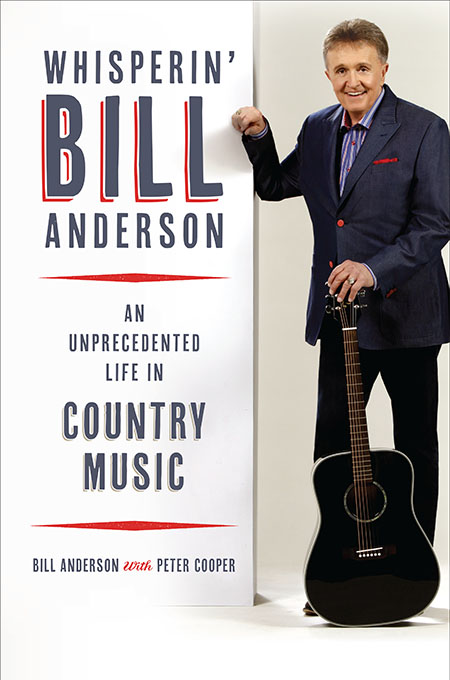