Andrew Ripp Lands His First No. 1 With “Jericho" on Multiple Charts

Legin is "Feelin Blessed" Ahead of Good Enuf Concert Series

Terrian's Debut EP "Genesis of Terrian" is Out Now

Tameka Ferebee Gets Personal with "I Am With You"

Earnest Pugh Hits the Road With the Outpour Experience Live

The countdown to Dale Ann Bradley's upcoming album Things She Couldn't Get Over is in full swing. Even though it's just the beginning of 2021, the songstress isn't wasting any time kicking her promotion efforts into high gear. Along with being featured on NPR's popular program "Morning Edition," Dale Ann was also recently featured by American Songwriter.

With only three weeks remaining until the February 5, 2021 release date, the five-time IBMA Female Vocalist of the Year winner is giving fans another taste of what to expect by releasing the title-track for download and streaming now (LISTEN HERE).

For the recently released title-track, American Songwriter raved about the recording proclaiming, "Warm vocals, set by searing instrumentation, paint a poignant picture of a nation divided and those who fall by the wayside in its wake. Detailing a heart-wrenching story, Bradley instills humanity in each face on the side of the highway, commanding further consideration from each of her listeners."

Dale Ann is set to appear on WSM 650-AM's Coffee, Country and Cody show on February 3, 2021 at 8:30 am CST. During the program, the singer/songwriter will catch up with hosts Bill Cody and Charlie Mattos. The Kentucky native will tell fans all about the new record, what went into making it and what the rest of 2021 is looking like. The appearance can also be heard online by visiting wsmonline.com.

Fans got their first taste of the record with the lead single, "Falling Down" (LISTEN HERE). Written by Ashby Frank, the song has a powerful message about finding courage in the worst times. The track currently sits at No. 1 on Roots Music Report's overall Bluegrass Song Chart along with the Contemporary Bluegrass Song Chart.

The full album features a total of 10 recordings. Joining Dale Ann on the collection is her touring band, "Moon Runner," which consists of Matt Leadbetter on dobro, Kim Fox on guitar and vocals, Pinecastle Records CEO Ethan Burkhardt on bass, and Mike Sumner on banjo. Things She Couldn't Get Over also includes special guests Michael Cleveland, Jim Hurst, Ronnie Bowman, Aaron Bibelhauser and Ashby Frank. Other standouts on the project include the empowering anthem "Living on the Edge," and the powerful ballad "In The End," which serves as the perfect closer to the record. 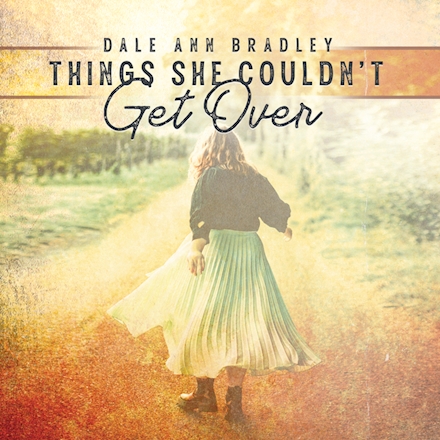