The Nelons Return with "Peace at Last" Oct 2

Ed O'Neal has announced the release of his memoir book, One Old Man Can't Be All That Bad. Many talented vocalists and musicians step onto concert stages across the country year after year; however, only the faithful and dedicated overcome the pressures of life on the road. Ed O'Neal, whose name has been synonymous with Gospel music for 60 years, can certainly be labeled as one of the faithful and dedicated.

O'Neal joined The Dixie Melody Boys in early 1960s and became owner and manager of the quartet a few years later. Over the years, O'Neal and The Dixie Melody Boys, have enjoyed tremendous success. In 2000, O'Neal was named recipient of the Marvin Norcross Award, the highest honor presented at The Singing News Fan Awards ceremony each year. Additionally, in 2004 he was inducted into the Southern Gospel Music Association Hall of Fame.

While success has abounded, adversities have also been encountered. In fact, over the past six decades O'Neal has seen over 90 personnel changes. "That has to be a record in this business," he says with a chuckle. Yet with all the changes, the Dixie Melody Boys and Ed O'Neal have stood the test of time. O'Neal, with the assistance of writer David Bruce Murray, chronicles those ups and downs in a new memoir, One Old Man Can't Be All That Bad.

Within the pages of One Old Man Can't Be All That Bad, O'Neal shares stories from his youth, growing up in Raleigh, NC, as well as how he met the love of his life, Mama Joy, as she was affectionately known to the many alumni of Ed O'Neal University-the group of men who at one time were members of The Dixie Melody Boys. The 84-year old also shares all about the trendsetting DMB Band, who made waves in the mid-80s with their progressive musical stylings, as well as his various business ventures, and the many hijinks he has experienced with the cast of characters he has traveled with during his career.

David Bruce Murray, O'Neal's co-author, is the owner of the industry websites SGHistory.com and MusicScribe.com and has been writing about Southern Gospel music in various forms for more than 25 years. "I had a blast helping Ed put his amazing life story into book form," Murray states. "As we were working together, we laughed a lot and also shed a few tears as I am sure many of the readers will as they read about Ed's life filled with music, faith, family and laughter. No one can tell a story quite like Ed O'Neal."

Ed O'Neal's love for his family, the people he has met through Gospel music, his desire to always present quality music, united with his desire to never compromise his responsibility to spread the Gospel are most evident within the pages of this historical account. This biography conveys the story of a man who has enjoyed blessing after blessing, while remaining dedicated and faithful to his music, his family and his Father. 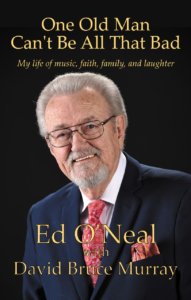