Phil J. Ministers to Those Struggling with "Be Alright"

UNITED's "On Repeat" Reminds Us We Can Never Exhaust God's Grace

Josh Tolley is a sought-after motivational speaker and radio/TV personality.  "The Josh Tolley Show" is heard in all 50 states and in 160 nations, and his content has been streamed, downloaded and broadcast to over 8 million people.  Tolley is a Liberty Award nominee, was featured in the short film Elektable , and served as a national television anchor for the Free and Equal Elections Foundation presidential debate in 2012. He has appeared on CBS, NBC, TBN, Messianic TV, the Church Channel, and many other television and radio shows.

Q:  What makes your new book, Evangelpreneur, different from other books of the same genre?

A: Most books concerning faith and finances focus mainly on either getting out of debt, saving money (which we falsely believe is stewardship), tithing, or they address how money isn't important and should not be something we strive to generate beyond what is perceived as 'enough.'  This approach, while popular in the past, has created a massive amount of damage. Four out of five people are one paycheck away from poverty, one in two don't have $500 dollars, 7,000 churches per year get foreclosed on, more people will file bankruptcy this year than graduate college, and suicide because of financial stress will claim more lives than traffic accidents. This is most literally becoming a matter of life and death.

Evangelpreneur is the first book of its kind in generations that teaches people that entrepreneurship, not employment, is God's plan for his people. It instructs people on not only what God says about it, but also how to go about putting these principles into practice. The book destroys the lies (Called in the book; 'lies of the Devil') such as 'it takes money to make money,' 'just do what you love,' 'not everyone is meant to be an entrepreneur,' and a number of other lies that stop people from earning money the way God designed. It also addresses how it is the responsibility of every pastor and church to teach people how to make money, not just what to do with it.

We also look at the fact that this issue alone is the number one missed opportunity in the Western world to spread the Gospel and save souls. This shocking statement is true and takes many readers by surprise as they realize how millions of Christians are overlooking it.

Q: List the main points you want people to take away from this book.

A: Entrepreneurship, not employment, is God's design for his people.

Everyone can and should make entrepreneurship part of their life.

It does not take money to make money.

Poor instruction by Christians for the last 100 years on this issue has cost lives, marriages, churches and it is only getting worse.
​
We have all seemingly fallen for a lie that the Devil tells us, which  is, we believe his definition of greed while actually becoming the type of 'humble greedy' God hates. I define 'humble greedy' as telling ourselves we must spend our most valuable resource -- time -- to make the cheapest resource - money --all while pretending that money doesn't matter beyond what we feel capable of earning, all at the expense of everything that is truly important in life. 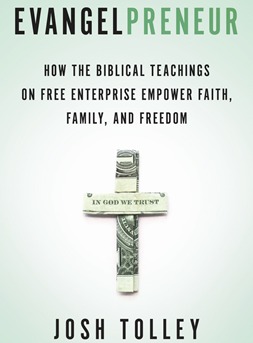 Q:  What are most people's biggest misconceptions about money?
A: The biggest misconception about money is that God doesn't think money is important, and having too much of it is greedy, while at the same time not realizing that when we work 30+ hours a week earning it, we are becoming by definition, greedy. We excuse that greed away though by saying "we need to pay our bills" or "I only need enough to survive."  We need to have a paradigm shift. If it is God who gives the power to create wealth (Deuteronomy 8:18) and God also says you cannot serve God and money, we see that entrepreneurship is actually how you serve God with money. Employment is when you serve money by submitting your life to another master. This concept is in direct contrast to how most Christians were taught.

Q: Why do so many Christians fall into the same money traps if they supposedly follow biblical principles?

A: For at least three generations now we actually have not been teaching Biblical principles when it comes to money. We are teaching the very system that the world teaches which is get good grades, get a good job, try not to be in debt, save for retirement, give to some good causes and you are then being a good steward. People around the world are amazed when they realize that that is not what makes a good steward and it actually, in many cases, is the opposite of what the Bible tells us to do. What many Christians and pastors are teaching is actually placing millions under what the Bible calls a 'curse' and many believe that they are being good stewards, but may actually be sinning. The Bible calls poverty a curse in Deuteronomy 28, then in Proverbs 6, God refers to poverty as an enemy, one that comes to steal and disrupt what should be. Jesus teaches us in Matthew 25 that misusing money, including just saving it and playing it safe, is a sin and is punishable. It is important to note, however, that this is not a 'prosperity gospel' book either. It is not about getting rich or sowing your last dollar into a ministry believing for a million fold return. Rather this book is a hard-hitting look at how we have been teaching the wrong things regarding money, life's calling, and serving the Kingdom for the last 100 years.
​
Q: If you were elected President, how would you fix the U.S. economy?

A:  The funny thing is I have been asked to run. If I were president, what I would do is immediately dismantle the tax code and put in place the Fair Tax. This would instantly put 30% more money in every family's pocket. I would then abolish the Federal Reserve and reinstate Congress as the head of the Treasury. These two things alone would create nearly a zero percent unemployment rate. I would put an end to these trade deals that only hurt American small businesses, and instead place tariffs on any incoming products so it would once again make financial sense to keep jobs here in this country. It would also make the U.S. dollar a more powerful trading dollar internationally.

Q: What can the ordinary Joe do to make sure his family is secure in a global economy that seems to be unstable?

A: The first thing the average person needs to do is define what I call their 'meaning of life.' By doing so, it will give them an accurate picture of what it actually is they need to make, how much time they should be willing to devote to earning money, and improve their quality of life. For example, most people are completely unaware that the practical poverty level in the U.S. is $70,000 and that working more than 30 hours a week leads to heart attack, cancer and divorce. Yet many of us believe that middle class is somewhere around $50,000 a year and 40 hours a week is considered responsible. No wonder the average Joe is failing. The next step would be to find a business that this average Joe can start right now. This may not be his dream business, but it is one that will get him making his own money and doing so with whatever resources he has available. Everyone, even homeless people, have been able to start businesses with whatever their current condition affords them.
​
Q: Talk about your conversion to Christianity and how that has impacted your life.

A:  I became a Christian in my early 20's through entrepreneurship...seriously. I had been studying the world's religions for a number of years at that point, and had determined that there is a God and He is the God of Abraham, Isaac, and Jacob, but I came to this realization through self-driven study of Scripture. I was not attending a church nor was I raised in a religious home. I was invited to a non-denominational Christian service by a bunch of business leaders I respected and I decided to go to "rub elbows," and it was then when I first heard a testimony about the love of God and the sacrifice of His Son. Faith to me is the foundation to which everything else I am is built upon. It surprises me sometimes how we treat faith as part of life -- I view faith as our life. Because of that, I try to make my faith part of everything I do. This leads to blessing sure, but it also leads to challenges. I know, however, that it is those challenges which allow faith to become deeply rooted and even a stronger guide in my daily walk. From the food I eat, where I shop, how I dress, and even what I teach - in every area, I want my faith to be the building block to who I am. Thankfully, that same faith allows for forgiveness when I fail and need to repent.